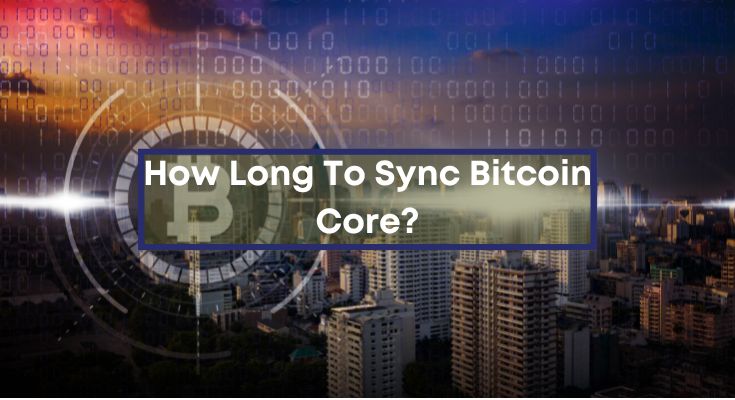 Assuming you are referring to the Bitcoin Core wallet, the initial sync can take quite a while (potentially days) as it needs to download the entire blockchain. However, once it is finished syncing, it will only need to download new blocks as they are mined, which should only take a few minutes. Bitcoin Core is a full node bitcoin wallet and therefore takes up a lot of space on your computer. You will need at least 145GB of free space on your computer to store the blockchain and to sync bitcoin core.

The bitcoin core wallet will take several days to sync and you will not be able to use your wallet during this time.

How long does it take to sync Bitcoin Core for the first time?

Bitcoin Core is a “full node” Bitcoin wallet, meaning it keeps a complete copy of the Bitcoin blockchain. This data allows the wallet to verify all transactions on the Bitcoin network. The initial sync takes a while because the Bitcoin Core wallet must download the entire blockchain, which as of August 2019 is about 215 gigabytes. Bitcoin Core is constantly verifying and adding new blocks to the blockchain, so the amount of data it needs to download will continue to grow. However, once the initial sync is complete, subsequent syncs will be much faster because the wallet will only need to download new blocks that have been added to the blockchain since the last sync.

Why does it take so long to sync Bitcoin Core?

How to speed up the Bitcoin Core sync process

What happens if you try to transact while Bitcoin Core is still syncing?

How to check the progress of your Bitcoin Core sync

Why is it important to wait for Bitcoin Core to fully sync before using it?

Bitcoin Core is the official Bitcoin client and wallet, though isn’t used by many due to its slow speed. It is important to wait for Bitcoin Core to fully sync before using it because it gives the user a complete copy of the blockchain, which is necessary to verify transactions. Not waiting for full sync can lead to inaccurate information and potential loss of funds.

What can you do with Bitcoin Core once it’s fully synced?

How long does it take for Umbrel to sync?

The process of syncing your Umbrel wallet with the blockchain can take some time, depending on the speed of your internet connection and the amount of data that needs to be downloaded. In most cases, though, the process should be completed within a few hours. Once your wallet is synced, you’ll be able to see all of your past transactions and balances, as well as any new transactions that occur.

How long does it take to start Umbrel?

Assuming you have all the hardware and software you need, it should only take around 10 minutes to get Umbrel up and running. The first thing you need to do is install the OS on your Raspberry Pi. We recommend using the latest version of Raspbian. Once that’s done, you can connect to your Umbrel and follow the instructions on the screen. The next thing you’ll need to do is set up your wallet. We recommend using the Electrum wallet, but any wallet that supports Bitcoin Cash should work. Once you’ve done that, you can start using Umbrel!

How do I speed up blockchain sync?

If you’re having trouble syncing your blockchain, there are a few things you can do to speed up the process.
First, make sure that you’re connected to a fast and stable internet connection. A slow or unstable connection will make it harder for your computer to connect to the blockchain network and will slow down the syncing process.
Second, try increasing the amount of storage space on your computer. The blockchain can be quite large, and if your computer doesn’t have enough storage space, it will have trouble syncing.
Third, you can try using a different blockchain client. Some clients are faster than others, and there may be one that’s a better fit for your needs.
Fourth, if you’re still having trouble, you can try reaching out to the support team for your blockchain client. They may be able to offer some advice or help you troubleshoot the issue.

How long does it take to install Bitcoin Core?

Bitcoin Core is a ‘full node’ Bitcoin client, meaning that it helps verify and relay transactions on the Bitcoin network. It also contains a wallet, allowing you to store Bitcoin on your computer. Although it is possible to run a full node without a wallet, it is recommended to use both.
Bitcoin Core can be used as both a wallet and a server. The wallet allows you to store and spend your Bitcoin, while the server helps relay Bitcoin transactions across the network. When you install Bitcoin Core, it creates a default data directory where it stores its files.

Bitcoin Core can take up to a week to sync with the network, although this time will vary depending on the speed of your computer and internet connection. If you are patient, you will be able to use Bitcoin Core to its full potential.